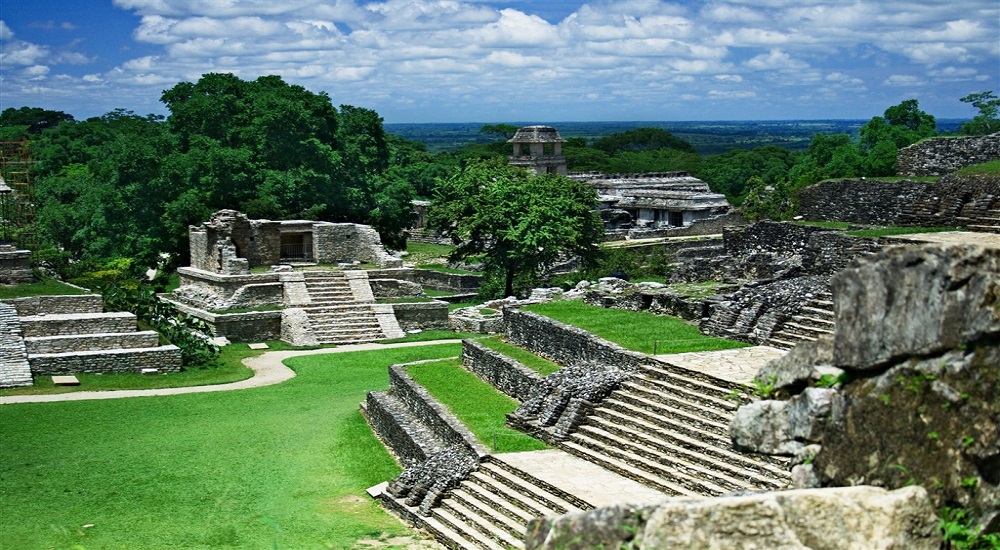 Welcome to Cancun, your pre tour night and get ready for this fun city at night.
Overnight at the ALOFT hotel 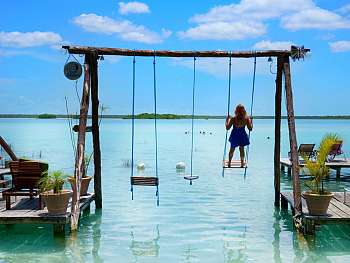 After breakfast, we will leave for Chicanná. On route, stop at the Bacalar Lagoon, also known as the “Lagoon of the Seven Colors” thanks to its water that reflects several colors, such as turquoise and jade, throughout its 50-kilometer extension Lunch and continue to Chicanná, located in the amazing area of the Bec River, which received its name from the particular Mayan architecture style and where visitors can see recently discovered archaeological sites surrounded by an amazing Mayan jungle. Visit of Chicanná archaeological site, which means “House of the Serpent’s Mouth”. This site was only discovered in 1967 and stands out thanks to its doors marked with animal shaped masks; the Structure II is quite special due to its huge zoomorphic mask that probably represents Itzamná, God of the Sun. Arrival and check-in at the Eco Village Chicanná hotel. Accommodation. 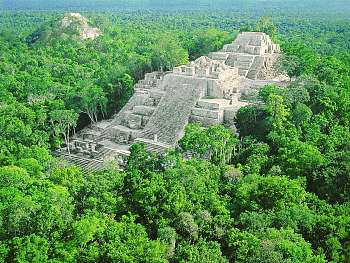 After a one-hour trip on the main highway, visitors will arrive at the drift that crosses the reserve of the country’s largest biosphere: Calakmul, which is the only real high jungle of the Yucatán peninsula. It hosts five of the six species of American wildcats as well as over 230 bird species and a great variety of flora. It is possible to see an incredible diversity of flora and fauna while traveling along this route. After one and a half-hour on a narrow road, you will arrive the Calakmul archaeological site, considered one of the most important sites, located approximately 25 kilometers from the border to Guatemala. Hundreds of stelas (monoliths) surround this region, which clearly show its Mayan domain. At the top of one of its largest monuments, visitors can admire the “green sea” of the huge Mayan biosphere. The visit ends with a break for packed lunch. Afterwards depart to Palenque. Arrival and check-in at Villa Mercedes Palenque hotel or similar. Overnight.

Visit of the Palenque archaeological site. The area displays beautiful Mayan work made in stone and stucco; this area is frequently recognized as one of Mexico’s most beautiful places due to its ruins enclosed in the Chiapanecan jungle. Its most important temple is called Templo de las Inscripciones (Temple of the Inscriptions), and it is here that explorers discovered Pakal’s tomb, with his famous jade green mask. Then the tour will go to Campeche, which is the capital of the Campeche State. Lunch in restaurant on route. Upon arrival to Campeche, short visit to the ancient town, surrounded by fort walls and towers built to protect this city from the pirates. Campeche has a Colonial mood thanks to its gorgeous houses and austere churches. After visiting the city, check-in at the hotel Plaza Campeche or similar. Accommodation.

Departure to Mérida with visit of the Uxmal archaeological site on route. Uxmal means “built in three stages” and it is a typical example of the classic and post-classic Mayan period; its main constructions are: Pirámide del Adivino (The Fortuneteller’s Pyramid), Palacio de los Gobernadores (Governor’s Palace) and the Cuadrángulo de las Monjas (Quadrangle of the Nuns). Lunch at restaurant. The tour continues to Mérida, also known as the “White City”, which has Colonial houses as well as houses that date back to the beginning of the century in Arabic, French and Italian styles. Those houses have witnessed all the old wealth that was generated thanks to the sisal culture. Stop at Mérida’s Zócalo, where visitors can admire the city’s main monuments: the Cathedral, the Government’s Palace, the Municipal Palace and the Francisco Montejo’s House. Check-in at the hotel Presidente Intercontinental Villa Mercedes or similar and accommodation. 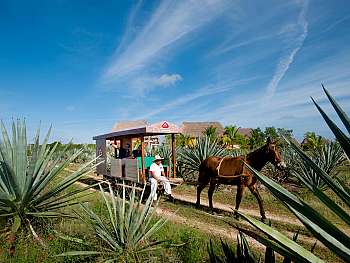 Departure to Hacienda Sotuta de Peon, where you can see the transformation process of the henequen thread, Yucatan´s old green gold. Hacienda Sotuta de Peon was built in the late 19th century in Tecoh. Walking through the Hacienda you will make a true journey back in time on board small wooden wagons named “Trucks” pulled by mules over old rails shipped from France in the late 19th century. At the end of the tour, submerge yourself in the crystal clear water of a wonderful Cenote on site. Lunch in the Hacienda. Return to Merida in the afternoon. Accommodation.

Departure to visit Chichén Itzá archaeological site. Chichén Itzá was the Mayan capital of Yucatán and flourished between the 5th and 10th centuries AD. Visitors can admire the impressive buildings of the northern and central archaeological sites, such as: the Kukulcán Temple, the Ball Game, the Observatory, the Warrior’s Temple, the Convent of the Nuns and the Sacred Cenote. Lunch at Chichén Itzá in restaurant. After that, departure towards Cancún and Riviera Maya, where the tour will arrive after approximately 2 hours. Arrival and transfer to the chosen hotel.

Departure - Cancun A flight back home

Good morning! It is now time for you to wrap this tour full of good memories of your beautiful vacation. It will be our pleasure, to plan your next tour for any of our world wide tours.
According to your departure flight, transfer to the airport will be provided for your return flight.