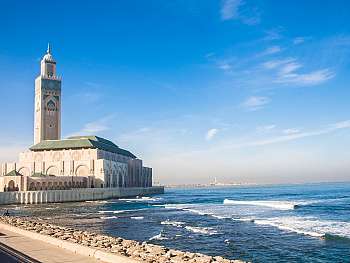 On arrival at Casablanca airport, you will be greeted with a warm welcome by an IBMT Tours Morocco representative who will escort you to your tour guide. Transfer to your hotel and enjoy an afternoon city tour of Casablanca, the economic capital of Morocco and its largest city.

Lunch at a local restaurant.

Visit the famous Hassan II Mosque, the landmark of the city with the tallest minaret in the world (210 metres (689 ft)). Visit the museum of Moroccan Judaism, the only one in the Arab world, and Synagogue Beth El.  Visit the Street of 7 synagogues and Jewish school. Stop next at Ain Diab Corniche, which is one of the city’s most fashionable districts. Complete the city tour with the visit of Mohammed V Square in the city center. Dinner and overnight in Le Casablanca Hotel Casablanca. 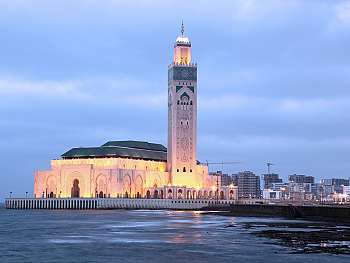 Transfer to Rabat, the capital of Morocco and one of the Imperial Cities.

Enjoy the city tour of Rabat. Began with the Mellah, a Jewish quarter, and Rabbi Shalom Ezzaoui. Visit the Kasbah of the Oudayas. This Kasbah was constructed during the realm of the Almohads dynasty (12th century). Stop next at Mohammed V Mausoleum, which is home to the tombs of the current king's father and grandfather. Your last stop in Rabat is Hassan Tower, which is a minaret built in 1195.

Lunch at a local restaurant.
Transfer to Tangier, the pearl of the North of Morocco and its main gate to Europe. Dinner and overnight at Hilton City Center & Residences in Tangier. 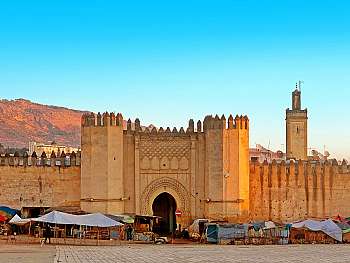 Enjoy a city tour of Tangier. Stop at the old town, locally called “The medina”. Visit the American legation, Dar El Oued Makhazen Kasbah, the Mendoubia Gardens, and the Grand and Petit Socco. Transfer to Cape Spartel after that, the meeting point of the Mediterranean Sea and the Atlantic Ocean. Cape Spartel was known to the Greeks and Romans as the “Cape of the Vines”. Visit the Cave of Hercules, which is Africa’s most north- westerly promontory with a strange sea window shaped like a map of Africa. Continue to Chefchaouen, the “Blue City” and one of the most majestic places to visit in Morocco. Lunch at a local restaurant.
A city tour of Chefchaouen is next. Visit Meknes which was the capital of Morocco under the reign of Moulay Ismail (1672–1727), a contemporary of Louis XIV, before it was relocated to Marrakesh.

Pause at the massive Bab El Mansour gate, which is the grandest of all imperial Moroccan gateways. Bab El Mansour gate was completed by Moulay Ismail’s son, Moulay Abdallah, in 1732. Hri Souani a complex of three different buildings built for granaries and stables is next. This amazing site has been used as a scene for many films, the most famous of which is probably “The Last Temptation of Christ” in 1988 by Martin Scorsese. Arrive in to Fes. Dinner and overnight at Hotel Sahrai in Fes. 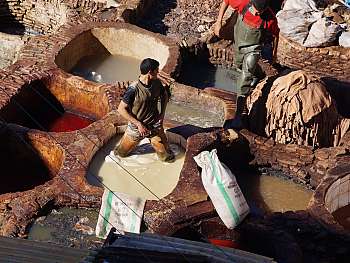 Enjoy a guided full day of Fes. Begining at the entrance to the largest royal palace in Morocco. Dating from the 17th century the Ibn Danan Synagogue was built by a wealthy merchant. Our tour continues to the Mellah, the Jewish cemetery and the Jewish museum.

View of panoramic ancient medina and enjoy an authentic experience at the traditional ceramic crafts village of Fes. Proceed to Fes El Bali, the ancient town or Medina, which is a medieval part of Fes that has not changed for centuries. Lunch at a local restaurant.

Visit the famous Al-Karaouine Mosque, built by Fatima Al Fihria in 857. The Mosque became home to the University of Al-Karaouine, which is the first university in the world and the world's foremost center of learning at the beginning of the second millennium. The university was built by Fatima Al Fihria in 859, and, since then, it has become one of the leading spiritual and educational centers of the Muslim world. While in the Medina, visit also a Merdersa, which is a Quaran school. Complete the city tour of Fes with a stop at the leather Souq and the oldest Leather Tannery in the world. The tannery dates back at least nine centuries. Dinner and overnight in Hotel Sahrai in Fes. 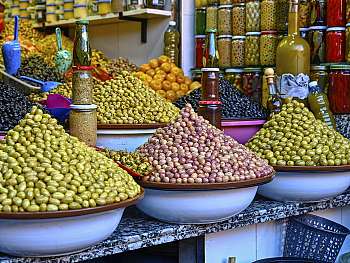 Breakfast in the hotel.
Early morning departure for Marrakesh. Morocco's most memorable experience. Founded almost 1000 years ago on the edge of the Sahara, this southern market town grew to become one of the great cities of the Maghreb and a UNESCO Heritage Site to boot. But Marrakech isn't some petrified piece of history that tourists come to gawk at, it's bursting at the seams with an intense density of life and a modern entrepreneurialism that puts Manhattanites to shame. This isn't a place where you can gracefully glide through. Instead you'll find yourself telling jokes with snake charmers, dining outdoors in the Djemaa el-Fna, discovering the latest henna tattoos and getting a hands-on scrub down in the local hammam. Pause for unexpected beauty and banter often with multi-lingual locals, because what are the chances, you'll come this way again.

Lunch at a local restaurant in Beni Mellal.

Continue to Marrakech.
If time permits see with the Bab Agnaou, one of the gates of the Medina. Saadian Tombs were built in the 16th century as a mausoleum for many Sultans. The Bahia Palace in the 19th century was supposed to be the greatest palace of its era. Check into the hotel with time to freshen up and get ready for Shabbat. Shabbat services Bet-El Synagogue. Shabbat dinner hospitality at Hazzan and Mrs. Ohayon's Home.
Overnight in Sofitel Marrakech Lounge & Spa Marrakech. 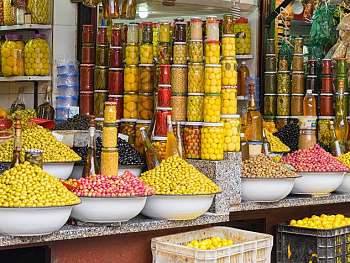 Breakfast in the hotel.
Shabbat in Marrakesh. Optional Shabbat services at Slat Laazama Synagogue in the Mellah, probably the oldest existing synagogue in entire diaspora still in use today .

Lunch will follow at the home of Hazzan Ohayon.

Afternoon walking tour of the Majorelle Garden created by French painter Jacques Majorelle. The garden has been open to the public since 1947. Since 1980 it has been owned by Yves Saint-Laurent and Pierre Bergé. After Yves Saint Laurent died in 2008, his ashes were scattered in the Majorelle Garden. The rest of the afternoon free until Havdalah. An exciting evening program as we stroll through the world famous Djamaa el-Fna Square – the heart of the city – when the square comes alive with snake charmers, magicians, fire eaters and street performers. Dinner in the hotel. Overnight in Sofitel Marrakech Lounge & Spa Marrakech. 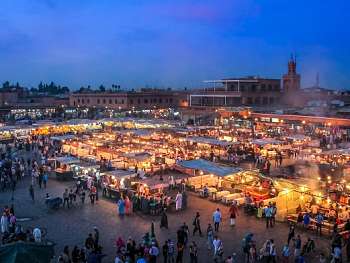 Start your day driving to Ourika, to discover the Berber villages of the Atlas Mountains on a full-day trip from Marrakech that explores broad valleys and lush orchards with views of Mount Toubkal, the highest peak in North Africa. Lunch at a local restaurant. We will stop for tea in Ourika Valley. Throughout the day, take in the mountains’ beautiful scenery: terraced gardens that climb steep hillsides, tumbling waterfalls, and an alpine kasbah. We return to Marrakech for half a day on our own.
Dinner and overnight in Sofitel Marrakech Lounge & Spa in Marrakech. 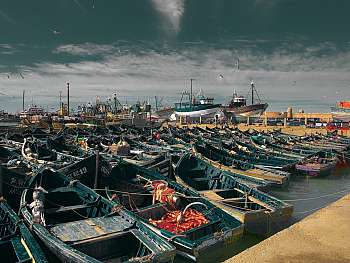 Continue to Essaouira which is another charming town in Morocco a relatively small, easily navigable beach city whith a distinct multicultural feel, resulting from the large Portuguese, French, and Jewish populations that once called it home. Its mild climate and expansive stretches of ocean sand also place it among Morocco’s top beach towns. Essaouira’s walled medina was added to UNESCO’s World Heritage list in 2001. Its well-preserved, late- 18th-century fortified layout is a prime example of European military architecture in North Africa. For the visitor, the mellow atmosphere, narrow winding streets lined with colourful shops, whitewashed houses and heavy old wooden doors make it a wonderful place to stroll.

Lunch at a local restaurant.
Visit the Mellah and some of the synagogues, tomb of Rabbi Chaim Pinto.
Dinner and overnight in Essaouria at Sofitel Mogador Essaouira. 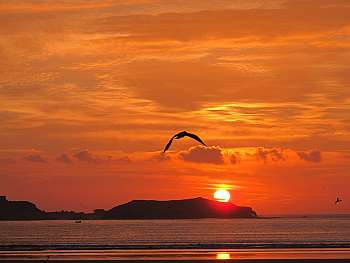 Transfer to Casablanca via Safi, Oualidia and El Jadida. Safi is one of the most attractive cities in Morocco thanks to its long history. The city was under protectorate by the Portuguese Empire from 1488 to 1541. During this period, the Portuguese built a fortress to protect the city.
Safi nowadays is the main fishing port for the country's sardine industry, and also exports phosphates, textiles and ceramics. During the Second World War, Safi was one of the landing sites for Operation Torch. Lunch at a local restaurant.
After visiting Safi, continue to Oualidia, another charming sea resort in Morocco. Oualidia is a small village on the Atlantic coast, facing a salt water lagoon and beach where ocean and coast merge. It is an ideal place to unwind. The magic of the lagoon and the tides provide a constantly-changing back veil. Poised on the edge of the ocean, in a site of great ecological importance, Oualidia will attract, captivate, energize and soothe in equal measure. Transfer to Casablanca via El Jadida for overnight. Dinner and overnight Le Casablanca Hotel in Casablanca.

Departure transfer to Casablanca airport (B)

A transfer will be provided to the airport for your return flight.
On your transatlantic flight back home you are so energized planning your next visit!

Based on a minimum of 10 paying participants

Based on a minimum of 10 paying participants